Deborah Jean Warner, curator of the medicine and science division of the National Museum of American History, Smithsonian Institution of Washington sent us an interesting article on how lever scales were used in the farm owned by George Washington.

George Washington, the first president of the United States of America, owned a big estate in Mount Vernon, where he died in 1799 and where he used many weighing instruments, mainly lever scales, to maximize his profits. It was common to weigh pigs before and after the slaughter in order to have some statistics on the percentage of meat that could be obtained from the live cattle and also to make some weighing tests in order to understand whether there was a higher convenience in selling the wheat in grains or as a volume. You can download the article from this link. 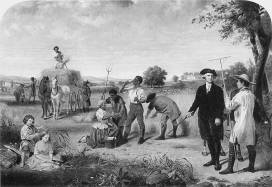