The Museum of Scales and Balances contains a specialized library, in constant expansion, with bibliographic material about the history of scales and weighing systems, of weights and measures, historic and legal metrology, all of which form a solid foundation for academic study.

The library heritage (part of the library system of Campogalliano, Carpi, Novi and Soliera) contains 1041 – indexed – volumes, as well as numerous brochures which have yet to be catalogued, as well as current journals on related subjects.

The Museum receives journals published by international collectors’ associations, which are indispensable to those who intend to carry out research on scales and weights.

In the wake of the May 2012 earthquake, the library, is temporarily located in the Municipal Library of Campogalliano; it is currently open to the public upon request, and requests may be made to borrow books (for information, call (+39) 059-899422 and ask for Lia Apparuti or collezione@museodellabilancia.it).

Donated by the Transmec company, there is also the major 1740 opus ‘Le arti di Bologna’ including works by Annibale Carracci and, consists of 80 etchings on paper of the widest variety of street vendors to be found in the city (from Water merchants selling water from the Reno to the Seller of food for the Mice, from the Blind man with a remedy for calluses to the Fowler with the Owl), many of which are drawn with a steelyard balance or measures of length and capacity.

Various works from the 19th century may also be found on the library shelves; physics manuals and information tables, as well as sales catalogues from the early 20th century.

Since 1991, the Museum of Scales and Balances has also served as a Documentation Centre, an institution able to collect, organize and disseminate documentary material so as to push back the investigative boundaries of the scale. The institute contains a rich documentary heritage of posters, catalogues, books, original prints and photographic reproductions of vintage material.

The Documentation Centre is open on demand. 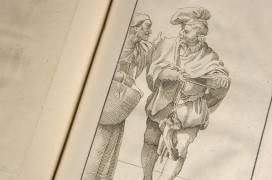