In Campogalliano, in addition to its own collection of more than 800 scales from the Roman steelyard balance to the load cell, a themed itinerary may be taken outside the museum. Starting from the welcome sign which identifies Campogalliano as the Town of Scales, there are many fragments scattered around the local area which constitute an informal small museum outside the museum: Piazza della Bilancia, where until a few decades ago there was a famous manufacturer of scales; the exhibition of scales in the Town Hall and the reliquary containing coal scales in the flowerbed next to the Town Hall; the zodiac symbolism (not surprisingly, the two-armed Libra) depicted in the recent urban furnishings of the pavement of Piazza Vittorio Emanuele II in the heart of the old town; the interesting ‘Rainbow of Levers’, a weigh bridge from the 1940s, its manufactured parts brightly coloured and restored, functioning electronically 24 hours a day, so that citizens may weigh themselves at any time, along with a dog, a bicycle or with friends. And if that is not enough, in participating restaurants, they can order ‘scale dishes’ which each year include tasty creations celebrating the extraordinary versatility of the famous Modena pear grown in the countryside around Campogalliano.

(CIVIC MUSEUM OF ARCHAEOLOGY AND ETHNOLOGY OF MODENA)

An itinerary of weights and scales is not complete without the Civic Museum of Archaeology and Ethnology of Modena, with its collection of articles relating to the city and its surroundings from the Palaeolithic to the Roman Age. Among the many finds, there are weights dating from the Bronze Age, round shaped with a hook or lenticular with grooves, a weight in bronze in the form of amphora from the Etruscan Age, and numerous lead weights from Roman times. Among the finds from the Roman Age is a notable bronze weight of five and a half ounces in the realistic shape of a squatting pig, and a sliding bronze weight in the form of a child’s head. Also attributable to the ‘world of measurement’ are some bronze compasses and a fragment of a limestone sundial.

At the Civic Art Museum of Modena, among the numerous finds related to the history and territory of Modena, starting from the Middle Ages, we can admire a column head by a sculptor of the Campionese school from the 12th century showing the scene of the Marys at the sepulchre, in which there is also a seller of aromatic ointments with an equal arm beam scale. In the Campori Gallery, there is ‘The Peach Seller’, an oil on canvas painting by Giacomo Francesco Cipper (known as ‘Il Todeschini’) documented from1700 to 1736 in which a steelyard balance is visible. In the museum, various sample measures of the Community are displayed, including shells for oats, sample weights for Modena and Bologna measures, the Modenese arms for earth and canvas, engraved by Gaspare Gaiani in 1792, and the beautiful small balance for weighing coins from the third quarter of the 18th century, with the crest of the city of Modena, augurs and the motto ‘Avia pervia’.

The famous Romanesque Cathedral of Modena also offers interesting cues for a themed ‘metrological’ visit. From the main entrance of the Cathedral, go to the first chapel on the right, Bellencini, also known as the St Bernardine Chapel, the walls of which bear a fresco from around 1475, depicting the Universal Judgement by Cristoforo da Lendinara. The centre of the scene features the Archangel St Michael enthroned, holding a golden equal-arm beam scale in his left hand, used to weigh the good deeds of the deceased.

Leaving the cathedral and heading towards Piazza Grande, in the corner where the Municipal Building meets via Castellaro, there is a small statue from 1268, la Bonissima, personification of the office of Bona Opinione, responsible for the supervision of weights and measures, represented by a woman intent on holding a balance (now lost). Originally, the statue was placed in the centre of the square and, on its pedestal, the following town sample measures were engraved: the passo, the braccio, the measure for bricks and roof tiles, for shoe soles, and the barrel size for fodder and wine (therefore dry and liquid measures). The only measurement missing is that of the pertica, too long to be included, and thus engraved on the pillar of the entrance stairs to the Town Hall. When the statue was moved to its present position in 1468, the measures of the pertica, braccio, and those for roof tiles and bricks were engraved on the outside of the apse of the Cathedral, and are still visible today.

The Cathedral and Piazza Grande

At the entrance to the Representation Rooms of the Town Hall is an oval oil on canvas painting by Camillo Gavasseti (c. 1596-1630) showing the allegorical image of Justice with her attributes: the shield and the scales; in this context, as emphasized by the writing on the scroll held by a putto, Justice is also the emblem of good government, competence of the Judges of the Victuals in whose residence the painting was once located.

From the exhibition ‘Pesare in camera oscura’: scales photographed from 1890 to the 1960s. Staged in 2002 in collaboration with the Museum of Scales and Balances, this themed interactive exhibition itinerary is put together from among the thousands of images archived at the Fotomuseo Giuseppe Panini, selecting those featuring scales, highly visible inside shops, travelling markets, scenes of farm labour, consortia, dairies, wineries, tobacco producers, doctors’ surgeries and factories. The scales depicted in the images are testament to a bygone past, of outdated working methods, a forgotten way of life in the city and, because of this, fascinating when rediscovered. The film, available for viewing upon request, illustrates this selection of photos and places scales in full view in the midst of the scene, highlighting the various types of instruments for weighing and their evolution over the years. Any class requesting to see the film will receive a free copy of the exhibition catalogue, a useful educational tool for further classroom discussion of the topics presented.

(Closed in June 2014 due to the flooding/earthquake which struck the area. For updated information, consult the link below)

In a museum which bears the testimony of labour, of the artisan and the private and public life of the farmer around the turn of the 20th century, the instruments for weighing connected to the work on farms and dairies, characteristic of our countryside are not to be missed. In the hall dedicated to the harvesting and processing of cereals, there is a bascule in wood and iron and a steelyard balance with a hopper made of copper for the weighing and filling of sacks (as well as two bushels in wood for measuring the volume of cereals). Instead, in the room dedicated to the collecting of milk and its transformation, there is a steelyard balance for weighing milk with an iron bucket and trestle, and a steelyard balance with a special plate for weighing cheese. On the first floor, in the reconstruction of a kitchen and domestic fireplace, next to a collection of approx. 15 steelyard balances, there are two lower suspension scales, one with a wooden cabinet and the other with a cast-iron base, both with brass plates.

Located in the Rocche Castle, the Museo Civico di Finale Emilia has numerous examples attributable to the world of scales and weights: from loom weights and frames from the Bronze Age to the innumerable finds from Roman times; weights made of stone, Roman balances in the form of a woman’s head with ‘Fausta’-styled hair. There are also examples of scale yokes, bronze scale arms on which it is still possible to see the engraved weight notches and a collection of clay loom weights, lead weights in the form of shells, suspension hooks for scales and balance chains. There are also examples from the more recent past: two coin-weighing scales from the 18th century in wooden cases with a set of weights, one with 28 coin weights bearing the Este eagle on the reverse, and an equal-arm balance with a wooden column and base used by the municipality to verify weights.

At the Museo-Antiquarium of Nonantola, housed in the refectory of the famous Benedictine Abbey, in the section dedicated to the Roman Age, an aequipondium is exhibited (sliding counterweight also called Roman) in the form of a lead amphora. On the body, in relief, there is the inscription C. CAES (I). On a line below there are other letters, heavily abraded, which may refer to the function of the object as a cursor weight. The weight corresponds to about 11 ounces and dates to the middle of the second century B.C. or 5th century A.D.

Although not used in the area of metrology, of note are some loom counterweights in terracotta in the form of a truncated pyramid and a ring, also from the Roman period.

(Benedictine Museum of Sacred Art of the Nonantola Diocese)

When visiting in Nonantola, the famous abbey and its Museo Benedettino Nonantolano and Diocesano d’Arte Sacra must be visited. Located in the palazzo of the former seminary, the Museum boasts a collection of precious testimonies to the history of the Abbey, among which, exhibited in the second room of this site, we might mention the polyptych by Michele di Matteo, dating to the end of the 15th century. The polyptych depicts the Madonna with Child and all the saints worshipped in the territory of Nonantola, among which there is also an Archangel St Michael holding a two-plate balance.

Inside the Museo Civico Archeologico di Castelfranco Emilia is the largest set of Aes Signatum in all the peninsula. Composed of nearly 90 bronze ingots, it constitutes a rare testimony to the economic activities of the 6th-5th century B.C. As well as the clear intrinsic value of the metal, these objects represented a system of referral for pre-monetary exchanges and weighing units of the era.

In a journey through the homes of scales, we would hope that in the near future the right location is also found for the scales, weights and measures of the University Museum of Natural History and Scientific Instruments (as published in the La Bona Opinione, Cultura scienza e misure nel ducato estense 1598-1860 exhibition catalogue); likewise, we also hope that the Plinio Paltrinieri Collection can soon be visited (with almost 600 coin weights and 40 scales of various types donated by the collector to the Museums of Palazzo Pio in Carpi, currently in storage but viewable upon request) and the Museum of Peasant Civilization of Villa Sorra, which, in the currently inaccessible stables of the villa, houses more than 100 finds linked to the world of weights. 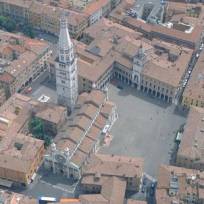