Hospitality in the Town of Scales

A proposal which brings together the taste for food to that of culture: customers of partner restaurants will receive tickets for free entry to the Museum of Scales and Balances on Sunday afternoons.

- Restaurants in the Town Centre

Open for lunch only, from Monday to Friday

- Restaurants in the immediate vicinity

Closed Sundays and every evening from Monday to Thursday; typical dishes of Emilia

Closed during the months of December, January and February; open only Friday, Saturday and Sunday during March, April, October and November; closed Wednesday from May to September; also offering gnocco and tigelle.

Closed Saturdays evenings and Sundays; open non-stop 11am to 10pm

Closed on Tuesdays and Monday open only for lunch; traditional cuisine and gnocco and tigelle

Open only on Friday (dinner only), Saturday (lunch and dinner) and Sunday (lunch only), from meat to cheese through the vegetable garden

Via Roma 175, Osteriola di San Martino in Rio (RE)

With a restaurant and five meeting rooms with a total capacity of 335 places. 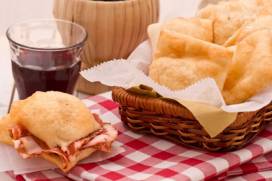